The reconstructed & the original Tower

During the Olympic Games, the floors of the tower housed the observation stands of the Games administrators, the police, the medical services, and radio and film reporters. The 75 meter (82 yard) long central portion of the Mayfield grandstand, located on the right and left of the tower, was built as a three-story structure. The film archives of the Reich were stored there during the war, among other items. After Russian troops entered the city, the archives caught fire, possibly due to the carelessness of a soldier. The ensuing heat was conducted through the Bell Tower in a manner resembling a chimney. Load-bearing elements of the steel framework were so twisted by the heat, that the stability of the tower was threatened. In 1947, the tower was blown up by British engineers, and the rubble removed.

The Olympic Bell fell and cracked vertically during the blast. It was then buried under the square in front of the Bell Tower. After laborious searching, using Geiger counters, the bell was rediscovered and removed in December of 1956. Soon thereafter, it was placed on a platform near the south gate of the Olympic Stadium. To this day, it is not known who wanted to test his prowess by firing anti-tank gun shells at the defenseless Olympic Bell, and thus caused the nowadays still visible shot-hole. The bell must have been hanging at that point in time, as it was holed through from the inside out. As a result of the damage, the old bell could not be rung any more. 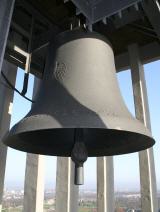 In the years 1960 to 1962, the Federal Ministry for Government Ownership authorized the reconstruction of the Bell Tower according to Werner March's plan, the architect of the original tower. A concrete and steel frame, covered with shell-limestone, was utilized for the original foundation. It is supported on the ground floor by six reinforced concrete pillars, each measuring one square meter, (39 inches). The cross-section of the tower decreases from 11.2 by 6.53 meters (37 x 21 feet) at the base, to 9.46 by 6.53 metres (31 x 21 feet) at the top. The concrete used for the construction comprised 720 cubic meters (25,427 cu. ft.). 130 metric tons of steel and 5,000 plates of natural shell-limestone were also used. The weight of the Tower is 2,500 metric tons. The steel bell, which rings the note F sharp, was cast by the Bochum Association for Cast-Steel, conforming to the structural specifications of the new building, weighing 4.5 tons, as opposed to the 9.6 tons of the old bell. The original, as well as the new bell, were cast by the same firm.