During the World Championship of Soccer in 2006, the stadium looked back on 100 years of sports-tradition. The "Berliner Rennverein" was founded to establish a track for horse racing in the upscale western part of Berlin in 1906. The architect Otto March was engaged for the construction work, charged with maintaining the "forest-character" of the area. The horse racetrack was already in use back in 1909. The original ticket-boxes still exist in the "Jesse-Owens-Allee". 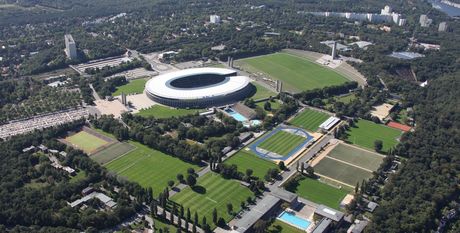 A stadium located in the center of the horse racetrack was conceived in the early 1900s, but could not be built due to lacking finances. Construction was eventually completed, and the stadium inaugurated, in 1913. Designated as the venue for the 1916 Olympic Games, unfortunately cancelled due to the First World War, the stadium provided seating for 30,000 spectators. After the war, the stadium served as the residence of a newly founded college for physical education. The college dedicated itself to the education of coaches, and to medical sports research. During the mid-1920's, the college obtained the area north of the racetrack, enabling the establishment of additional buildings and practice-areas. The sons of the stadium architect Otto March, Werner and Walter, won the competition to build the "Deutsches Sportforum" (German Sports Forum). Construction began, but had to be stopped at the end of the 1920's, once again due to financial problems. Berlin was chosen to host the XIth Olympic Games in 1931.

Werner March was selected to refurbish the already existing stadium. Shortly after Hitler came to power in 1933, a decisive change in the building plans was made. The NS regime decided to construct a larger stadium in the center of the Olympic grounds. Designed as a "prestige object" of the German Nazi Empire, the construction costs were immaterial; additionally, no extravagance was spared in attempting to impress the public, the media, and foreign governments with National Socialisms purported accomplishments. During World War II, the stadium was slightly damaged. After the war, the British Military chose the German Sports Forum as their headquarters in Berlin, ensuring that the destroyed parts were rebuilt.